Have you ever wondered what makes a company from a particular country succeed on the other side of the world or globally? The so-called glocalization strategy is at the heart of the international success of major brands. This article will explain what glocalization means so that you too can apply this international strategy to your business and make it grow beyond your borders.

Contenidos ocultar
1 What is glocalization?
1.1 Glocalization examples
2 How to implement a glocalization strategy
2.1 Give maximum importance to storytelling
2.2 Keep local customs in mind
2.3 Proper communication in the native language
3 Cultural glocalization: a way to make your company more sustainable

A glocalization strategy is when a brand is committed to cross-border sales, considering the peculiarities of the area where it wants to sell.

The word glocal, as its name suggests, comes from the union of the terms “global” and “local”. The mindset of companies pursuing a glocal strategy is based on the familiar idea of thinking globally, acting locally.

The first to implement a glocal marketing strategy were Japanese entrepreneurs in the 1980s. They called it dochakuka, which in Japanese means “he who lives off his own land”.

A good glocalization will ensure that your brand, regardless of its origin, can be perceived as part of a country’s everyday life.

There have been cases of foreign brands that have become a complete icon of a country’s culture. This is due to a particularly good glocal marketing strategy. Some of the best-known examples are:

How to implement a glocalization strategy

At this point, you may be wondering what steps are needed to implement glocal strategies in your business so that it can thrive, no matter which market it enters.

Here are three fundamental elements of any international strategy and how you can adapt them glocally to make your landing in a foreign market a successful one.

Give maximum importance to storytelling

Depending on the country, some cultures will accept more sentimental messages, while others are more daring or transgressive. For example, in Spain, direct advertising that does not hesitate to stir up emotions and pull at the heartstrings of the viewer is more deeply rooted. However, in Latin America, commercials tend to be friendlier and much less emotionally charged. 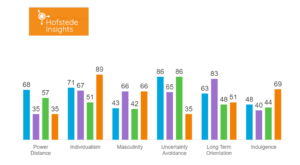 Knowing these cultural differences is crucial to guide the tone of our brand and our message in each territory. However, this does not mean that we cannot take risks, although we must be aware of them.

Companies take advantage of major global holidays such as Christmas, Valentine’s Day or the arrival of a new season to launch special products, unique promotions or advertising campaigns.

However, when launching a commercial strategy in a given country, the particular festivities and customs of each area must also be considered.

Carnival in Venice, Fallas in Valencia, St. Patrick’s Day in Dublin, Chinese New Year or Oktoberfest are all local festivals that must be taken into account in our marketing strategy if you want to sell cross-border.

But be careful! Sometimes local festivities have ended up spreading to other countries. This is the case of Oktoberfest, which is already celebrated in other countries besides Germany. Research should be carried out to make a good marketing plan in these situations.

Proper communication in the native language

Of course, a good glocal strategy cannot be properly implemented if our brand does not communicate with consumers in their native language. This is a trust signal in any international ecommerce.

It is important in these cases to rely on translation services for corporate materials such as Ontranslation to avoid making mistakes that could cost your brand its reputation or trust.

Also, don’t forget that using idioms and expressions to get closer to your audience is a fundamental part of any good glocalisation work.

Cultural glocalization: a way to make your company more sustainable

Nowadays, concern for the environment is increasingly widespread. Consumers are increasingly demanding that companies have values such as environmentalism. Brands that ignore this social issue are condemned to receive a great deal of criticism and to be severely damaged.

Therefore, by implementing a glocalization strategy in your business, you can steer your company towards a more sustainable path. But how?

Producing in the country where you want to expand or using local raw materials is a form of glocalisation, and at the same time, a way to make your production processes more sustainable.

Cooperating with local companies or helping humanitarian organizations in the country can be other such methods.

Glocalisation is a way to highlight the importance of the local in a globalised world and also a strategy to reduce your carbon footprint.

Invented languages, to what end?

There are a large number of invented languages or, more technically speaking, constructed languages. Esperanto, Volapük, Klingon, Interlingua… All of them were… END_OF_DOCUMENT_TOKEN_TO_BE_REPLACED

What is cultural diversity and why is it important?

The most spoken languages on the web. How do they affect our reality?

The most spoken languages on the web match the most spoken ones in the offline world, at least the ones… END_OF_DOCUMENT_TOKEN_TO_BE_REPLACED