What is transcreation and why is it necessary for globalisation?

It’s an increasingly fashionable term among translation and communication agencies. From the moment we start considering cultural differences, and the need to excite and engage the viewers, traditional translation just won’t cut it.

Intention, tone and meaning depend on context

Transcreation is about adapting contexts. Different facts and situations affect the communicative style of a particular place and time. Even within the same language, if spoken in many different places, we will have a great deal of variation.

Let’s think for example, of speaking explicitly about sexual intention, of courting. This, localised in our context, can be rude or even seen as criminal in other cultures. And it’s not just about a question of intention, it can also influence the style or tone of the discourse.

What in the US in very direct ways may sound brave or daring, in countries like Finland (where personal space is almost sacred) may be understood as an attack on personal freedom.

For this kind of example, advertising transcreation results in a change in the traditional working style of those who translate content from one language to another. In traditional translation, it’s common to just work from the source text, practically word for word (or at most sentence for sentence).

Transcreation, on the other hand, conveys the overall meaning of each paragraph, rewriting it from scratch and considering the context and cultural aspects of the target culture. 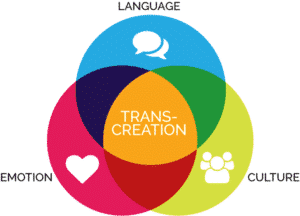 Advertising is the most direct form of communication between companies and the public. Therefore, it’s usually the area where transcreation can be most decisive. When launching an advertising campaign in another country, we have a lot at stake. If we adapt images, symbols, etc. we’ll also have to adapt our discourse.

Transcreation aims to touch us and transmit values and vision of the world.

Some brands choose to look for universal ideas that will work internationally. This mightn’t work that well because ultimately, the stories we tell must engage our audience, appeal to their emotions, values and outlooks.

Advertising giants, such as Coca-Cola, are aware of this and transcreate their campaigns. Take the Coca-Cola Break Up advertisement they adapted through transcreation, depending on whether they were targeting a European, Asian or American market.

Besides the campaigns, the most important thing for small and medium-sized enterprises that are beginning to go global, is the transcreation of the naming and claims they use.

We must adapt both our name and that of our products as well as our slogans to our target market. These are the first messages the public get from us. Thinking and working with them in context through transcreation is a safe bet.

A claim that plays with the double meaning of language, like the hashtag #Yovendomicuerpo (#Ibandagemybody)), launched by the DEBRA association to raise awareness about butterfly skin, a rare disease, will only be effective in Spanish.

It plays on the identical form of the first-person verb forms of “vendar” and “vender” in Spanish which mean either I bandage, or I sell my body.

Marketing isn’t just advertising, and transcreation, like any message, is international. There are many cases beyond traditional advertising, where transforming a message by translating it can be very effective.

An example is the transcreation of email marketing campaigns. Communicative styles of these types of messages vary greatly in terms of the degree of cordiality with strangers.

Here’s an example of how even the simplest concepts vary from one culture to another:

Where in Spain it’s normal to use the informal “you”, in Argentina it would sound awful, and we would have to change it to the “voseo”, the Argentine version.  The same applies to the standard greetings: in English we usually use “dear” when greeting our guest, whoever they are, while in Spanish we split it into “apreciado” (for strangers) and “querido” (for people closer to us).

Let’s talk about multilingual SEO positioning. We’ve already discussed this in several previous articles: to carry out an international SEO translation works! In this case, an effective transcreation will make the difference between a clear: a well-positioned text and one that no one will read because it appears on the tenth page of Google results.

Just finding a keyword for another market is already a transcreation exercise. 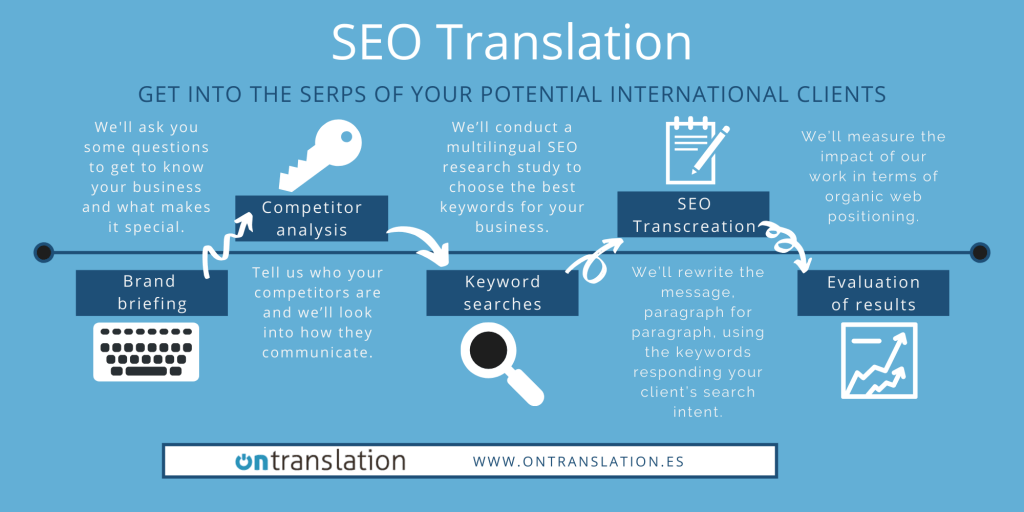 How people search for information vary in different markets. The search intents from one person to another will also depend on their culture.

Likewise, groups of words that work in one culture might not work well in others. That’s why it’s so important to rely on professional translators who know how to do a multilingual keyword search in the target market.

Once we have found the best keywords, we can begin transcreating our texts, focusing equally on the SEO positioning as well as transmitting the message to our audience.

Transcreation is the international boost your business needs

Those who communicate well use transcreation for communicating their international content. Context in advertising and marketing is necessary if we want to position ourselves on Google.

Here you have an interview Spanish business influencer, Emilio Márzquez did to us:

To go global, we must prioritise our new audience in the target country, understand their values and be aware of their preferences. Don’t go for a word-for-word translation!

Translation for food e-commerce sites: cultural issues beyond the public

Doing a translation for a food e-commerce site is not a simple task. Many difficulties arise when translating an online… END_OF_DOCUMENT_TOKEN_TO_BE_REPLACED

Thanks to the Internet, in today’s globalised world, translation services for import and export  companies is essential. We buy and… END_OF_DOCUMENT_TOKEN_TO_BE_REPLACED

The Chinese market is a giant on the world stage, with continuous growth and a very promising future. Because of… END_OF_DOCUMENT_TOKEN_TO_BE_REPLACED